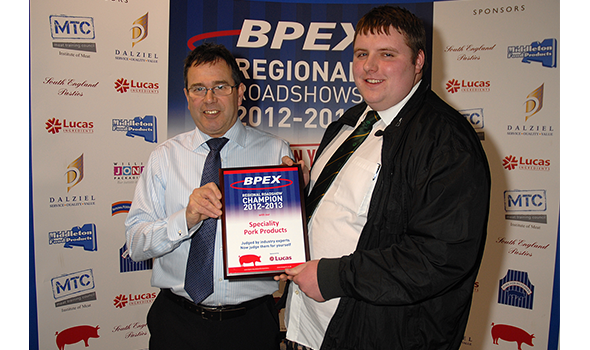 A ‘Chorizo Scotch Egg’ and a ‘Chicken Curry Pie’ – both created by Green’s of Pangbourne – have won top awards from professional judges in competitions. Other products from the family firm were also commended.

The Scotch Egg marries a traditional favourite with the subtle flavour of the Mediterranean chilli. Wrapped round a free-range egg, chorizo meat brings a new dimension to the snack. The innovation greatly appealed to the expert assessors at a professional butchers’ contest held in Sussex, who praised overall appearance; size and colour; ease of cutting; texture and structure; and most importantly taste and smell.

Similar success went to Green’s for their Chicken Curry Pie at the National Meat Products Competition run by the National Federation of Meat and Food Traders in Worcestershire. It won the fiercely fought contest for the title Speciality Hot-Eating Pie.

Both products reflect the increasing appetite for slightly spicier lines which Green’s has noticed amongst customers, and represent a fresh slant on traditional products. The accent on highest quality ingredients and customer service which won Green’s the ultimate prize of Britain’s Best Butchers Shop in 2011 have contributed to the firm’s ongoing success.

Said Green’s Christopher Cripps: “We have noticed that demand was rising for chilli and curried products, and so the idea for the new Scotch Egg and Chicken Curry Pie was born. These competitions give us a chance to get our products tried out by top industry experts, and it is great to get their seal of approval.

“Our new Curried Pork Sausage also won a Gold Award at a recent event – this combines our well-known free-range pork from local farms with some delicate curry flavouring”.
The same high-quality pork is used for Green’s bacon, cured and smoked on the premises. Maple-Smoked Bacon and Cherry-Smoked Bacon have also recently secured Gold Awards.

Green’s has been trading in Pangbourne for over 50 years, and has been owned by Master Butcher Royston Hine for the last thirty. The business is now run by Royston, his son-in-law the Chef Philip Cripps, his grandsons Michael and Christopher, and other family members, supported by a team of expert butchers.