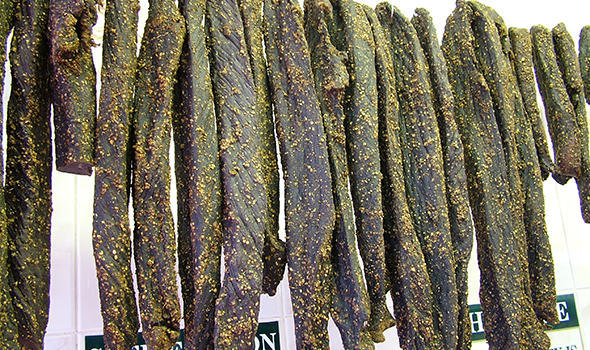 Prior to the introduction of refrigeration, curing or drying process was used by pioneers to preserve all kinds of meat all around the world. In s Africa they specialised in drying cos of climate Today biltong is most commonly made from beef using steaks cut from the hip such as topside or silverside. Other cuts can be used, but are not as high in quality. Usually the strips of meat are marinated in a vinegar solution a few hours, which is poured off before the meat is flavoured with rock salt, whole coriander, black pepper and brown sugar. The strips are then dried. Biltong can be made using other species, but we specialise in beef.

Created in a similar curing and drying process to biltong, droewors is a sausage which has become popular in its own right as a snack.

Boerewors is based on an older tradionally Dutch sausage made from coarsely minced beef combined with minced pork and spices (toasted coriander seed, black pepper, nutmeg, cloves and allspice). Like many other forms of sausage, boerewors is preserved with salt and vinegar, and packed in sausage casings. Traditional boerewors as sold at Green’s is always formed into a continuous spiral.